Andrew Sealy Back to Ambassadors 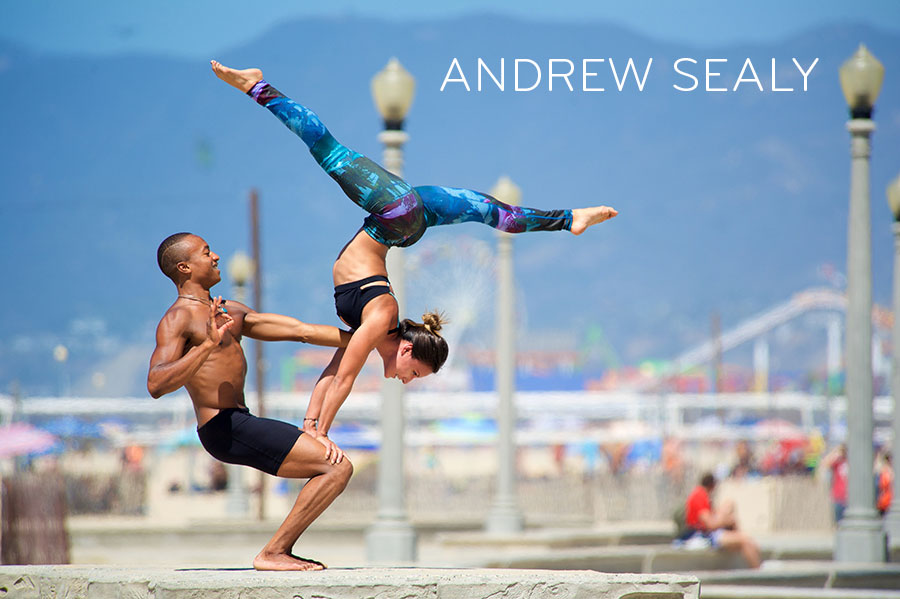 A YUNI MOMENT WITH ANDREW SEALY

Andrew Sealy is a vibrant young yoga teacher, movement artist and co-founder of “Yoga Revealed”, a resource for Yogis and Yoginis, and even people who are simply curious about trying yoga. From a Barbados family, Andrew lives and practices in Santa Monica, California and often practices and breathes the sea-air around the iconic Muscle Beach in Venice.,/p>

“I have a fast metabolism, and from a physical mass standpoint, I want to remain light, especially because one of my passions is AcroYoga, which is partner practice. Yoga is daily self-discovery for me. Especially in the paired practice of AcroYoga, I am always finding new depths to the cellular bonds in my own body, and also to each being, person, tree—everything.”

Andrew loves dance-like movement, and is enthused about AcroYoga, which melds acrobatics and yoga, because “this practice allows many body types to transcend their limitations and find connections with another.” But there was a time when he was more sedentary and a bit of a bookworm as a Microbiology major. He spent a lot of time in the library. And although he played soccer every day, he recalls, “I couldn’t touch my toes.”

The epiphany came when a college girlfriend brought him to his first Bikram yoga class. “That’s when I began to experience the union of body and mind,” he says. “I learned the disciplines of the postures, but more importantly I began to explore and expand the depth of my breath. And through my breath, I began to find my focus that has rewritten my life.”

In addition to offering private yoga trainings, consulting and coaching, Andrew is also a performer in Living World Entertainment, a live theatre troupe, as a surreal and beautiful Living Water Statue in the latest production called “The Immortals”. 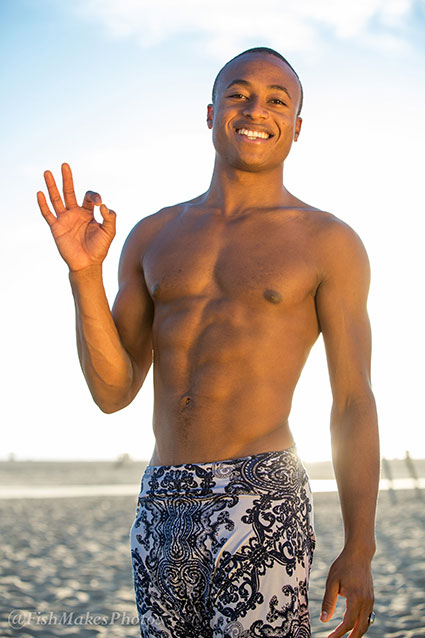 When I’m not on the mat…

”I’m riding my bicycle around Santa Monica and Venice, on my way to visit a client.”

“Chef’n up some goodness” with Andrew:

He grew up loving whole, wholesome, simple foods with an emphasis on greens, fish and fruit, and no interest in red meat which is not culturally present in his native Caribbean. Today, he loves cooking vegan specialties for his roommate and friends: ”We should see food as our medicine.”

And, although not plagued by a massive sweet-tooth, he does have his moments where only vegan, gluten-free chia-seed brownies, or pancakes, and vanilla hemp milk, will hit the spot.