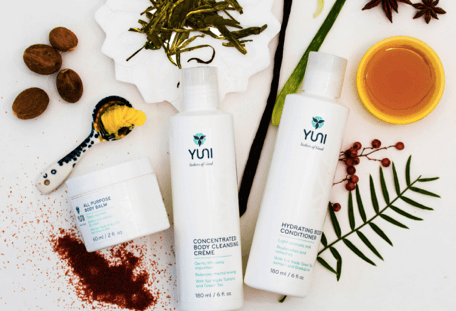 An assortment of products from Yuni.
Courtesy Photo

Beauty for yogis by yogis is the best way to describe Yuni, a new skin, body, hair and aroma brand that is meant to enrich one’s yoga practice beyond the mat.

Launching in July at Yunibeauty.com, Yogaworks, Credo Beauty and select studios, Yuni was developed by Emmanuel Rey, who helped spearhead the development of Aveda as a natural, sustainable and profitable global player. After 10 years at the Estée Lauder-owned brand, Rey left and traveled around the world with his wife. During that time, both participated in a teacher training for Ashtanga yoga and the rest, well, is history.

“Coming from the beauty industry, we naturally started talking to the people that were [at the teacher training] with us about their beauty routine and also why they like yoga so much,” said Rey. The students noted that they feel so great during yoga that it would be ideal if they could feel like that longer and not only during and right after the practice.

Made up of 13 stockkeeping units, the line, which includes natural ingredients, encompasses convenience, pleasure and memory. An example of convenience is the Mini Shower Sheets, which are meant to cleanse and refresh on the go. In terms of pleasure, the Microveil Hair Treatment is body heat-activated to restore shine during the yoga practice. And the memory aspect has to do with the product’s aroma. “At the end of practice when you go into savasana, you can apply some of these products under your temples,” said Rey. “After a few sessions your brain is going to start to connect the sensation of savasana. It’s this specific idea to connect the yoga practice with a texture, aroma, something very specific, which then helps you to recall the sensation.”

To promote the line, Rey has created a community of yoga and beauty influencers with a goal to involve them in the development of the brand. The company sent about 150 lab samples for feedback and the brand ambassadors gave opinions about visuals and packaging colors. “We really want to own that relationship between yoga and beauty because we want to not only create by yogis for yogis, but with yogis as well,” he noted.

Priced from $12 for the Instant Shower Sheets to $29 for the Active Calm Face Serum, industry sources estimate that Yuni could do $1 million to $1.5 million at retail in its first year on shelves.

“Yoga is a lifestyle in itself,” declared Rey. “As a bigger strategy, we are very keen on really contributing to the global development of yoga because we believe in the values of it. We believe it’s a health routine for people, not only physically, but mentally and spiritually.”